Why I left a D-Level Job

Founded in 2001, my company, Red Dream Studios, has been fortunate enough to have worked with over 200 entrepreneurs and businesses. I’ve personally received over 40 kudos and shout-outs on LinkedIn. Some of the relationships I have built have lasted longer than most marriages, and every one of our clients has been a valued partner and friend.

In 2007, I had decided to take what was a side venture and take the leap into full-time entrepreneurship — and began operating Red Dream Studios 24/7 (as any entrepreneur will tell you, you leave, breathe, and eat your company). The company because a profitable success, achieving near 20% growth during its first 4 years, and between 5%-10% thereafter. There were peaks and valleys, of course. In 2014, I hit what seemed like the Grand Canyon of valleys, and I began to get a little nervous. As a sole proprietor, nothing hurts more than feeling like your company is failing and having no one around you to help figure out why.

So I decided to explore if taking a hiatus was the answer — to help refocus and reinvigorate my career. Fortunately, there was an opportunity to return to the company that helped me become a seasoned Software Product Manager, X2O Media. Having had gained over 7 years of experience running Red Dream Studios full time, I was hired as the Director of Product Marketing.

The knowledge I gained over the past 2+ years in this D-Level position was invaluable, particularly in the fields of content marketing, both online and off, and in many other areas of digital marketing. Having corporate benefits, group insurance, and a consistent source of income are life perks that are comforting and cannot be understated.

Entrepreneurs will tell you there’s a certain appeal to being the head of your own show. Working with clients and helping pull off their projects (often at the last minute) provides a certain adrenaline rush that cannot be understated either.

What I’ve learned during my hiatus can be summed up with one word — passion. As Yo-Yo Ma put it, “Passion is one great force that unleashes creativity, because if you’re passionate about something, then you’re more willing to take risks.” So despite the relative security of a 9-5 job, I’ve discovered that operating Red Dream Studios is like not having a job at all. I’m passionate about it.

So yes, I’m back. Do you see yourself making the same decision I did? 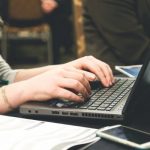 How to get customers to engage with your businessBranding, Business, Entrepreneurship